On the 8th of May, the country will be commemorating VE Day – the end of WWII in Europe. It is 75 years ago that Germany unconditionally surrendered to the allies. It is important that we still mark this date as we not only need to remind ourselves of the dangers of fascism and the appalling atrocities carried out by the Nazis but also remember those who sacrificed their lives for the freedom of Britain and Europe.

It is a timely reminder that in times of crisis we can all pull together to overcome the gravest threat. As this country and the rest of the world grapples with Covid-19 and the death and misery it is inflicting upon individuals and communities we can recollect how this nation survived those dark days when much of Europe was occupied and our island stood alone under threat of invasion.

It is uplifting to think that it is someone, who lived through those days, Captain Tom Moore, who has now raised the morale of the country through his incredible fund-raising effort for the NHS. He is one of the few surviving veterans of WWII still alive today and can recall those times first hand but many families will have had relatives who served their country during those difficult times.

I have my own family story to tell of the war. 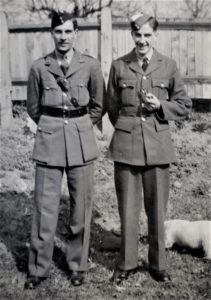 This is a picture, taken in 1942,  of my father, Keith Boatswain (on the left) and my uncle Colin Rees. My father was a captain in the army and my uncle was a pilot in the RAF. Neither of them escaped the war unharmed. My father was involved in operation Market Garden in 1944 (best known through the1977 film A Bridge Too Far) when the allied forces tried to capture Arnhem Bridge over the Lower Rhine in the Netherlands. My father was in a troop carrier which got blown up by a landmine on the road to Arnhem. He had amazing luck as he was the only one to survive, though he broke his back. He made a remarkable recovery, which is just as well, otherwise, I would not be here! However, for the rest of his life, he would be reminded of the war with constant back pain.

My uncle also was incredibly lucky. He flew Mosquitos, built by de Havilland, and tested down the road at Hatfield. It was a remarkable airplane known as the “Wooden Wonder”, as much of its construction was of timber, which made it incredibly light and fast for a twin-engined aircraft. During the war, it evolved to fulfill many roles, including the low-to-medium-altitude daytime tactical bomber, a high altitude night bomber, a pathfinder, and photo-reconnaissance aircraft (there are three types of Mosquito,  including the Prototype, on display at the de Havilland Museum Aircraft Museum:  https://www.dehavillandmuseum.co.uk/dehavilland-aircraft/world-war-2-piston-engine-aircraft/ )

My uncle Colin flew the fighter-bomber model and was eventually shot down. He suffered severe injuries but managed to survive but like my father was haunted for the rest of his life with physical pain. As seems the norm with so many veterans neither of them would talk about their part in the war and I regret I did not take the opportunity to prise out more about their stories.

There must be many families who now wish they knew more about what their relatives did in WWII. Whatever they and their families went through, let’s not forget them and commemorate VE Day.

By Tim Boatswain, Professor of Anthropology & History and Chairman of the St Albans Civic Society.

Follow Tim on Twitter @timboatswain  and Tim Boatswain on Facebook Click the link: https://www.stalbanscathedral.org/Pages/Events/Category/events for upcoming virtual events presented by Tim on the Nature of Evil and his course on Heresies in the Church.